It used to be the toyroom, but the little people here are turning into almost big people and there isn't a lot of playing with toys going on around here. For the past few months we have been working on decluttering. The shelves in the toyroom were full of toys nobody touched any longer. Little People, Little Pets, little kid board games.... you get the picture. So we cleared a lot of stuff out and then did nothing for a month or two, the fact that we are months away from co-habitating with a teenager forced us, and by us I mean me, to go back in and take another look. The girls were very helpful about deciding what sorts of things had run their course and we cleaned out a bunch ore stuff. It's never an easy job and I'd just as soon not do it, but there's only so much space to be had in blogmotherland. Anyway we purged and cleaned and tidied and rearranged some furniture and what did we get for our troubles.... 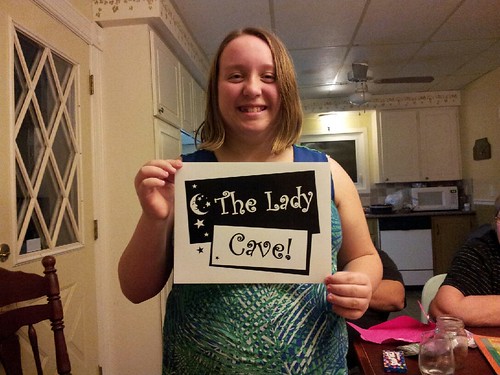 Friends of ours have some hang out space in their basement that they call the Man Cave. Our first evening hanging out in the toyroom was for us three girls to watch Gilmore Girls while Mike watched the Raptors on the big screen. As we were getting glasses of water and knitting (okay that one was just me) and fuzzy blankets Abby told her Dad that we would be retiring to the Lady Cave and he was not allowed to join us. I think Mike laughed for three days about that one and by that time the name had stuck. It's actually officially official now that we have the sign and everything.

Now my bloggy friend Lynn asked me what the Lady Cave looked like (aka what do the tweens want in a hangout space) and it turns out not too much.... 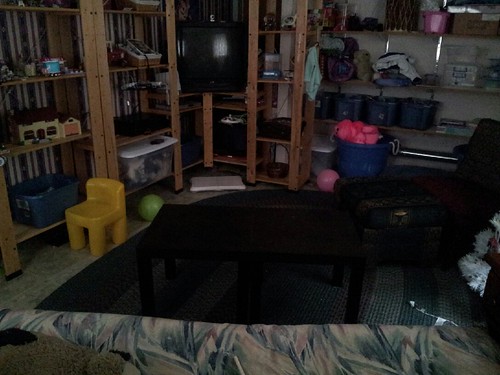 A TV, ideally a TV with Netflix and we're working on that, but it hasn't happened just yet. They do have a dvd player and the Wii. Lego is still king around here, so we used the space to display some already built projects that the kids love to play with. 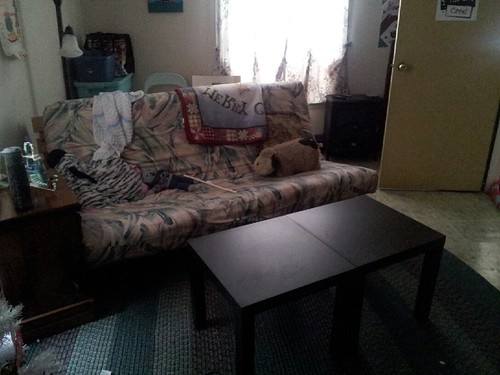 A futon because the Lady Cave also doubles as our guest room. A couple of weeks ago I picked up two end table for super duper cheap and pushed them together as a coffee table. The girls are forever borrowing my nesting table to use in there. Solved that problem. 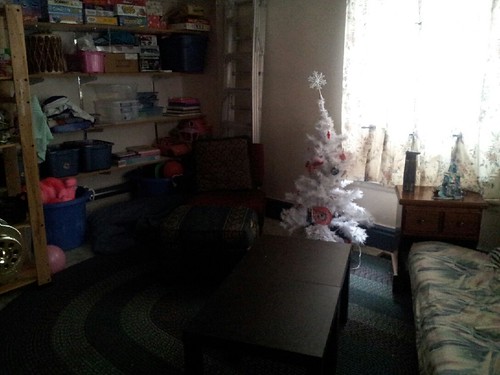 And a Christmas tree. Maya was so upset about taking down our tree that I agreed to let the little one in there stay up for longer.... which probably means it will still be there in October, but whatever. Pick your battles, right.

So that's it, that's our little tweenie hang out space. A space she can call her own to have friends over and not have to hang out in the same public spaces as her lame-o parents.

The absolute best part though... Abby, Maya and I have been binge watching Gilmore Girls which we now do in the Lady Cave and every time we are preparing to watch an episode or three Maya summons us all by yelling out, Lady Cavers assemble!! Funniest thing ever.
Posted by Shan at 9:30 pm

Looks fantastic! We are looking to upgrade to some older tweenage space now, too. Our basement is okay, but I think it is lacking in table space - the Lego is still getting pulled upstairs when building happens. Love your idea for two end tables pushed together - I'm on it!