So I got a really good deal on a roast a week or so ago and had thought about tossing it on the old barbie when I stumbled upon this recipe instead. 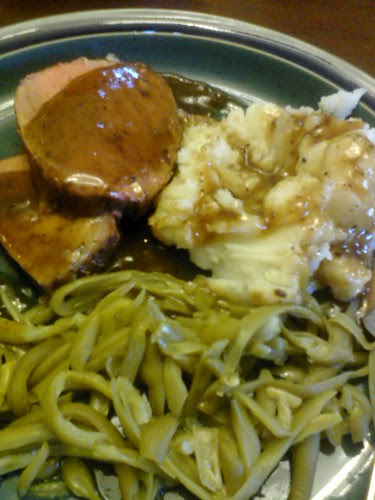 Preheat oven to 500 degrees F for 20 minutes. Season the roast with salt and pepper to taste and put in a shallow roasting pan with no lid and no water. Lower temperature to 475 degrees F and cook the roast for 21 minutes (7 minutes per pound). Turn the oven off and leave the roast in the oven for 2.5 hours. Do not open the door. Roast's internal temperature should reach 145 degrees F. Cut into thin slices and serve.

Recipe Notes: This is one weird recipe huh? I took the time to read some reviews of this recipe and I am glad I did. Apparently this recipe doesn't work so great in a gas oven if you follow the instructions. What I did instead, after the 21 minutes I decreased the temperature again to 200 degrees F and left it alone for 2.5 hours. I usually do my roasts in the crock pot and they are good and cooked by the time we eat, so it was a nice change to have some pink in the middle. I would definitely make this again. The only change I would make was to use a rub on the meat. The high temperature forms a nice crust on the roast, the salt and pepper was good, but I think a rub would have made it even better.

What is What's Cooking Wednesday and how can I play?

What's cooking Wednesday was born out of a desire to get out of that what's for dinner rut. Playing is easy, on Wednesday post a recipe that has been tried and tested by you and then pop over here and add your name to the Mr. Linky. When entering your name also add the name of the recipe in brackets and make sure you link to your What's Cooking Wednesday post and not just your blog's front page.

Don't make me be a jerk. And don't forget to link back here, the home of What's Cooking Wednesday.

So for example I would write Shan (Speedy Chicken Stir Fry) in the name section. For the URL section I would post this: http://shanrev.blogspot.com/2007/10/whats-cooking-wednesday-speedy-chicken.html

I'll let you in on a little secret, my WCW recipes are almost never made on a Wednesday. So feel free to cook and photograph whenever you have time and join us posting on Wednesday
Posted by Shan at 10:09 pm

I was wondering (and still am) how a roast could be done in that short of time in any oven!! I think your method sounds a lot more likely. I do love a good roast..pure comfort food :D

I am sharing my recipe for almond butter truffles. Sorry about the duplicate....my son was helping me do link ups and he typed the title in wrong. Thanks!

HI
I just found your link-up. SOrry about the duplication -- I wrote my name instead of the post -- please delete that.I hope you like me yogurt!

It looks too good to be true! I must try it.